Company also executes binding Letter of Intent to conduct due diligence and if warranted enter into an option agreement to acquire 100% of El Alacran copper gold project in Colombia.

August 19, 2015 – Toronto, Ontario: Royal Road Minerals Limited (TSXV:RYR) (“Royal Road Minerals” or the “Company”), a gold and copper focused mineral exploration and development company, is pleased to announce that it has entered into an indicative offer and binding letter of intent with RA Apraiez (“RA”) for an option to acquire 100% of the La Golondrina gold project in southern Colombia. The Company is also pleased to announce that it intends to raise up to CAD$1,000,000 in additional funds to help finance its planned initial operations in Colombia.

The La Golondrina project is a locally Colombian owned and operated high-grade intrusion-related and vein-hosted gold project in Nariño Province of southern Colombia (see Figure 1). The project comprises stacked shallow-dipping quartz-veins and vein zones with in excess of 30 historic working levels in an area of approximately one square kilometer and over a vertical interval of approximately 400m. Veins and vein zones have mining widths ranging from some 20cm to 1m in true-width respectively and have been developed from adits over horizontal distances of (up until recently), no more than 100m length before lack of power and thus lighting and ventilation forced miners to retreat (see Figure 1). Gold grades are highly variable with 51 selective underground vein samples returning a mean of 12.8 grams per tonne but with a standard deviation of 13.8 grams per tonne. The highest quartz vein sample to-date has returned 63.7 grams per tonne gold over a 1.5 meter long vein-parallel channel sample. Samples from the intrusive host rock adjacent to gold bearing veins have returned up to 3.8 grams per tonne gold and 6.8 grams per tonne gold has been returned from a 2m square panel-sample in an underground vein stockwork zone. 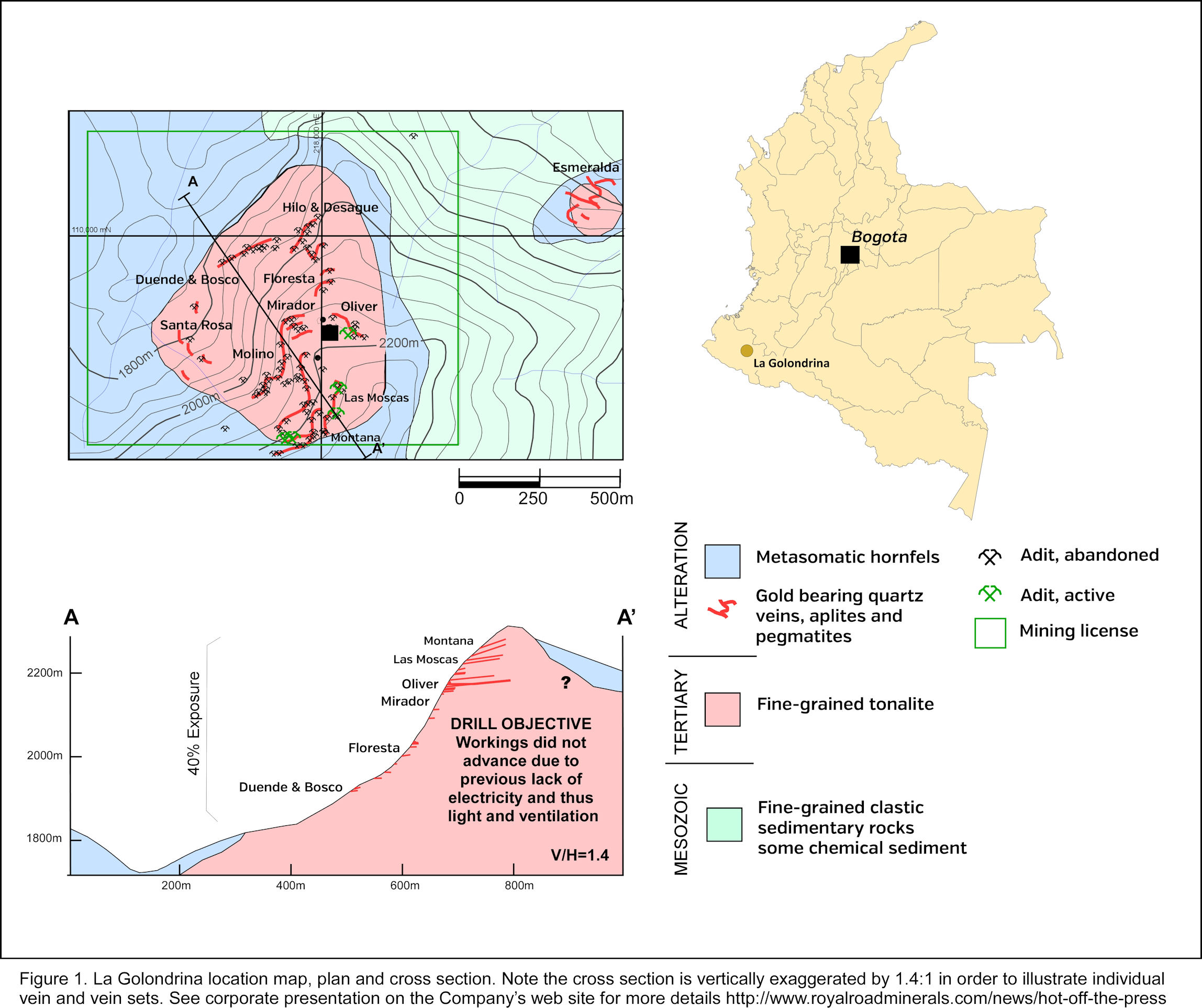 There has been no drilling or systematic exploration conducted at La Golondrina. Management of the Company believes that there is an opportunity to define a significant high-grade plus million ounce resource at the project, to rationalize, modernize and expand the current operations and achieve relatively early cash flows from modest capital investment.

The Golondrina project is hosted in a prolific high-grade gold mining and gold mineralized region covering an aerial extent of approximately 400 square kilometers. One owner-operated and two toll-treatment gravity/CIL plants are located within a 15km radius of the Golondrina project.

The concession contract for La Golondrina project was granted on April 23, 2007 and is valid for 30 years. The current mine is a developing and expanding underground room and pillar operation. Mine development is currently active on two levels.The following is a summary of the principal terms of the binding letter of intent:

The El Alacran project is a copper and gold project located in Cordoba province in the northwest of Colombia. The project is a copper-gold skarn hosted in a marine volcano-sedimentary sequence over a 1.8km strike length. A total of 13,724m meters have been drilled at the project with various in-house (but Qualified Person conducted) resource estimates suggesting plus million ounce gold equivalent potential. Topography is favorable for mining by open pit methods; mineralization remains open along-strike and at depth with interpreted potential for a subjacent mineralized porphyry to the east.Royal Road Minerals has executed a binding but non-exclusive letter of intent with the owners of El Alacran project to conduct due diligence then, if warranted, secure finance and settle terms of a Definitive Agreement on or before October 15, 2015.The following is a summary of the principal terms of the underlying agreement and the subject of the binding letter of intent:

Royal Road Minerals is also pleased to announce its intention to complete a brokered private placement (the “Offering”) of up to 10,000,000 ordinary shares (“Ordinary Shares”) of the Company at a purchase price of $0.10 per Ordinary Share for gross aggregate proceeds of up to C$1.0 million.

The net proceeds of the Offering will be used by the Company to help finance its planned operations in Colombia and for general working capital purposes. In connection with the Offering, the Company may pay fees to Loeb Aron & Company Ltd, its placement agent, and to certain finders in an amount equal to 7% of the aggregate proceeds from purchasers sourced by such parties. In addition, as additional compensation, the Company may issue such placement agent and finders broker/finders warrants in an amount equal to 7% of the number of Ordinary Shares issued to such purchasers pursuant to the Offering.

The Offering may close in one or more tranches, the first of which is scheduled to close on or about September 3, 2015. Closing of the Offering is subject to the approval of the TSX Venture Exchange. The Ordinary Shares will be subject to a hold period under applicable securities laws, which will expire four months plus one day from the date of closing of the Offering.

“This is an exciting development for our Company” said Tim Coughlin, Royal Road Mineral’s President and Chief Executive Officer. He also stated: “The La Golondrina project has clear and immediate potential to become a significant high-grade gold resource and we consider the region it is located in to be one of the most prospective and currently permittable in Colombia. The move into Colombia is not an unnatural one for us; our team has extensive South American experience. I worked on gold exploration in Colombia over the years 2001-2005 and count it as one of the most prospective countries in the World. Indeed, the fact that some 50M new reportable gold ounces have been discovered there in the last 12 years is, in our opinion, testament enough to that. Our immediate focus of course is La Golondrina and capital raised during this investment round is destined for in-ground investment there. If our due diligence proves satisfactory at El Alacran and if there is acceptable finance or a suitable partnership available to help us develop that project, then the Company will advance there also.”