Royal Road Minerals Limited (TSXV:RYR) (“Royal Road Minerals” or the “Company”), a gold and copper focused mineral exploration and development company, is pleased to announce that it has entered into an option agreement (the “Option Agreement”) effective as of October 6, 2015, with Richard Ignacio Apraez Caicedo and Anastasio Ademelio Solarte Rodriguez (collectively, the “Optionors”) to acquire 100% of the La Golondrina gold project, located in southwestern Colombia.

The La Golondrina project is a locally owned and operated high-grade intrusion-related and vein-hosted mine-development project in the Nariño department of Colombia (see Figure 1 attached). Operations and mine development on the project are carried out by the Optionors and their salaried employees. There are no informal miners on the license area. The geology at the La Golondrina project comprises stacked shallow-dipping quartz-veins, vein zones and stockwork zones with in excess of 30 historic working levels in an area of approximately one square kilometer and over a known vertical interval of approximately 400 meters. Veins and vein zones have mining widths ranging from 20 centimeters to one meter in true-width, respectively, and have been developed from adits over horizontal distances that, until recently, were less than 100 meters in length (see Figure 1). Gold grades are highly variable with 51 selective underground vein samples returning a mean of 12.8 grams per tonne but with a standard deviation of 13.8 grams per tonne. The highest quartz vein sample to-date has returned 63.7 grams per tonne gold over a 1.5 meter long vein-parallel channel sample. Samples from the intrusive host rock adjacent to gold bearing veins have returned up to 3.8 grams per tonne gold and 6.8 grams per tonne gold has been returned from a two meter square panel-sample in an underground vein stockwork zone.There has been no drilling or systematic exploration conducted at La Golondrina. Management of the Company believes that there is an opportunity to define a significant high-grade plus million ounce resource at the project, to rationalize, modernize and expand the current operations and achieve relatively early cash flows from modest capital investment.The La Golondrina project is hosted in a prolific high-grade gold mining and gold mineralized region which covers an aerial extent of approximately 400 square kilometers. One owner-operated and two toll-treatment gravity/CIL plants are located within a 15 kilometer radius of the La Golondrina project.The current concession contract for the La Golondrina project was granted to the Optionors on April 23, 2007 and is valid for 30 years. The current mine is a developing and expanding underground room and pillar operation. Mine development is currently active on two levels.

The following is a summary of principal terms of the Option Agreement:

The Company has the option to acquire a 100% undivided interest in the La Golondrina project.

After making these payments and completing this exploration work, the Company may, prior to the third anniversary of the effective date of the Option Agreement, give a notice to the Optionors of its intention to complete a feasibility study. If, after completing the feasibility study, the Company determines that the development of a mine is justified at such time, the Company may exercise the option and, thereupon, it will acquire a 100% interest in the La Golondrina project (subject to the royalty described below), the Optionors shall cease all mining operations at the La Golondrina project, and the Company shall pay the Optionors an aggregate of US $100,000 per annum until the Company commences commercial production. In the alternative, the Company may, at such time, elect to defer making a production decision and exercising its option for up to three years, and instead pay to the Optionors the aggregate sum of US $20,000 per annum during such deferral period.

“We are very excited about our prospects at La Golondrina” said Dr. Tim Coughlin, Royal Road Mineral’s President and Chief Executive Officer. He added that “The La Golondrina project ticks a number of boxes for us; firstly, the gold grade in the veins and in the vein zones offers the potential for the possible development of a substantial and highly profitable high-grade underground or open-pit mining project; secondly, there are three permitted and operating CIL facilities within close proximity to the project; thirdly, our relationship with the current owners offers the Company a head start in a number of important areas, including, community relations, and fourthly, the La Golondrina project is located in a prolific high-grade gold producing area where there may be opportunities for the Company to evaluate and, if deemed advantageous, acquire other mineral properties. Our current intention is to focus our efforts on the La Golondrina project and to become an exemplary member of the mining community in the Nariño province. We plan to commence work by conducting a laser assisted survey of all accessible underground workings, completing saw cut channel samples on multiple levels and defining targets for surface drilling as early as possible in 2016.”

The information in this news release was compiled, reviewed and verified by Dr. Tim Coughlin, BSc (Geology), MSc (Exploration and Mining), PhD (Structural Geology), FAusIMM, President and CEO of Royal Road Minerals Ltd and a qualified person as defined by National Instrument 43-101. 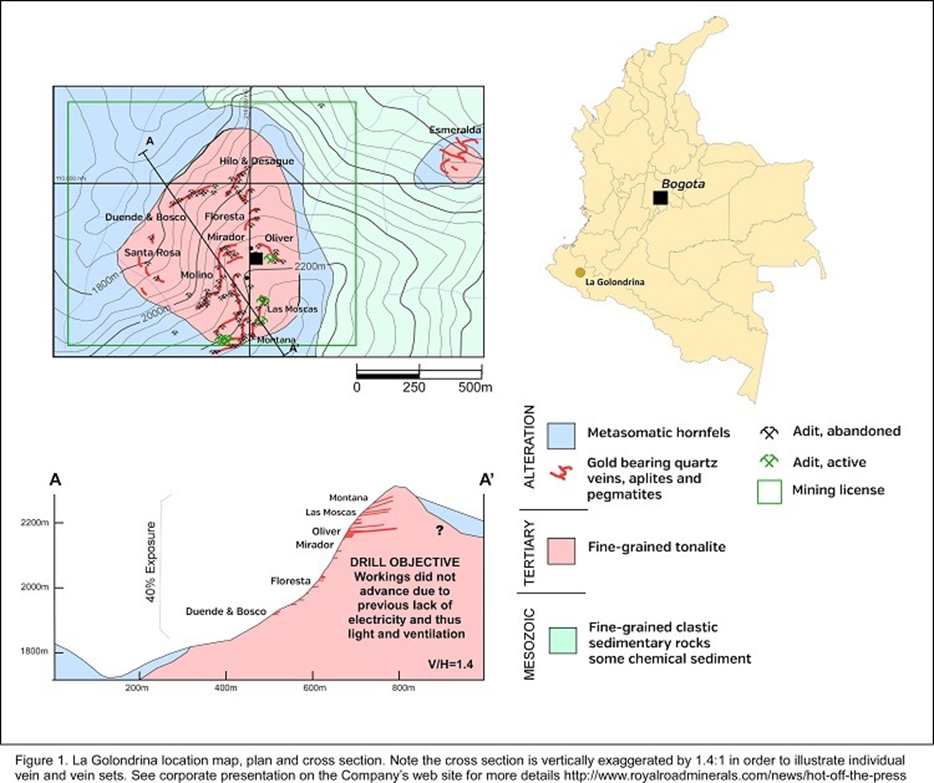