The Gömeç project was acquired through government tender by Royal Road’s JV-Partner, Oremine Madencilik Sanayi ve Ticaret A.Ş. (“Oremine”) in 2008. The first “scout” diamond drilling program on the project was conducted by Oremine in 2012. Some notable intersections from that initial program include GS-07, 16.7 meters at 6.4g/t, GS-19, 52.1 meters at 1.3g/t and GK-07 25.0 meters at 1.0g/t gold (see royalroadminerals.com for results table). Royal Road Minerals executed an option agreement to earn up to 50% of the Gömeç project (and other Oremine projects; in September of 2014 and since then has conducted ground magnetic and radiometric surveys, soil, rock and drainage geochemistry and geological mapping along the 10km strike length of the gold mineralized system. In late 2014 the Company conducted an exploratory reverse circulation drilling program at the project, notable results from that program include GRC-014, 76 meters at 1.0g/t (including 24 meters at 2.0g/t gold and 18.7g/t silver), GRC-013, 56 meters at 1.0g/t (including 22 meters at 2.0g/t gold and 15.6g/t silver) and GRC-014, 40 meters at 1.0g/t gold in contiguous drill holes located 100m away from each other.

The Company is now preparing for a follow-up drilling program which is expected to commence before July of 2015. Soil geochemical surveys have been extended, further reconnaissance rock-chip sampling has been conducted across the entire project area (see Figure 1) and IP geophysics is currently underway. The soil geochemistry has further extended areas of known gold mineralization and identified new areas for further sampling to the northeast and southwest of existing anomalies (Figure 1). Reconnaissance rock-chip geochemistry has highlighted new gold mineralization associated with what appear to be dome bodies at Tıfıllar and breccia bodies to the north of the Kubaşlar area (Figure 1).

“We are beginning to get some idea of the extent and nature of gold mineralization at Gömeç and as work continues and results are returned it looks more encouraging” said Tim Coughlin, Royal Road’s President and CEO “The system extends over a significant distance at surface and is still open to the northwest and southeast. We are looking forward to integrating the IP with current information and to drill testing targets this Summer” 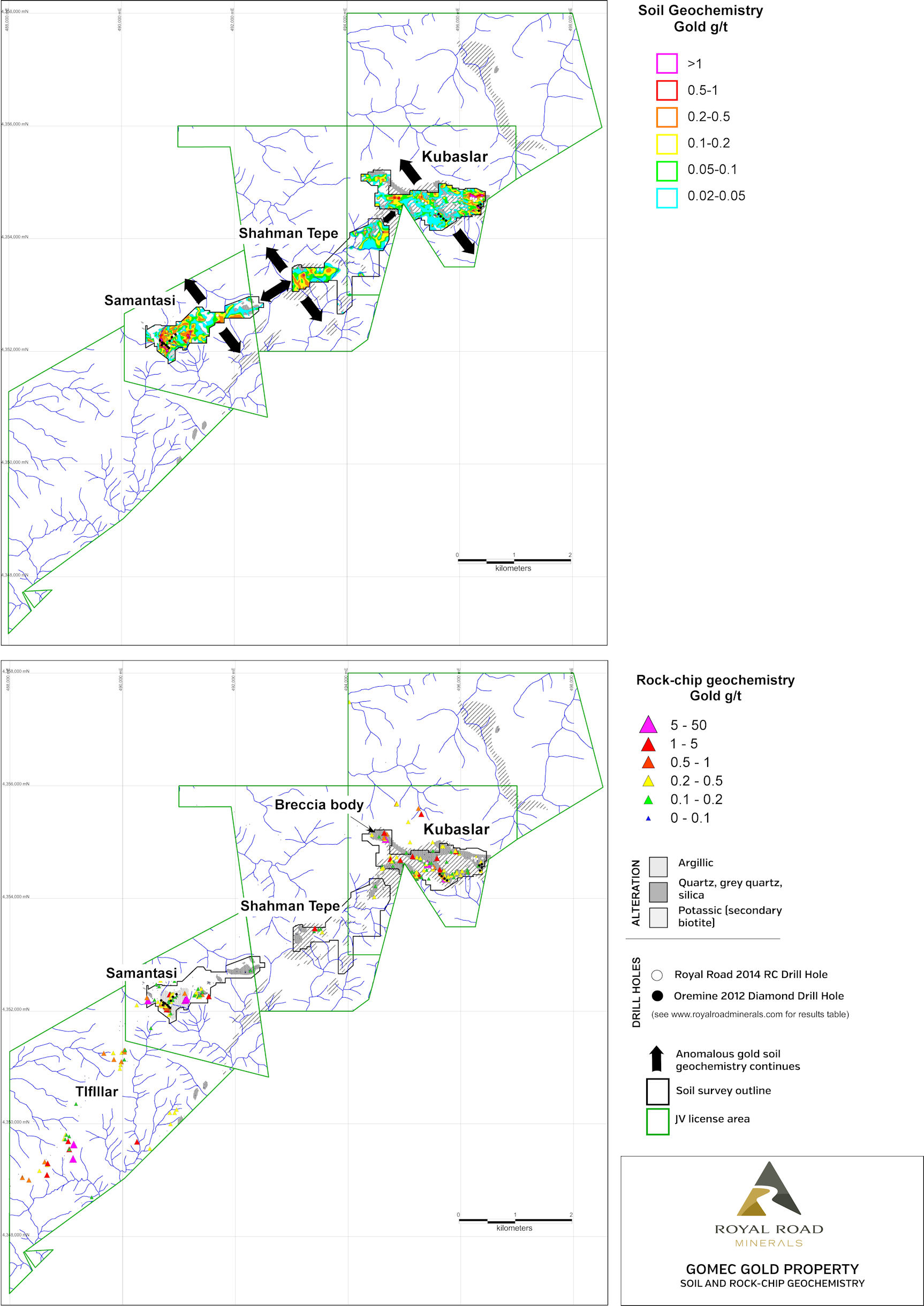