It has been a very long time between newsletters for which we apologize but as evidenced, I think, from the news flow in September of this year, your company has been well-occupied since our last newsletter way (way) back in Q3-2016.

Last week we presented at the 2ndColombia Gold Symposium in Medellin. The event is organized by local journalist and industry commentator Paul Harris. Rick Rule made an excellent keynote presentation, which (paraphrasing the late Mrs. Lindbergh) was just as stimulating as (Colombian) black coffee and just as hard to sleep after. You can get the gist of his thesis here. We took the opportunity to publicly present, for the first time, our agreement with ECOMUN and our aspirations in the highly prospective gold and porphyry copper belts of Colombia’s Nariño Province. Convincing the audience of the prospective nature of our land package in Nariño was made somewhat easier by various other geological presentations at the conference, but most notably by Dr Gloria Preto of the Servicio Geológico Colombiano (SGC). Gloria announced that the SGC would be flying an airborne geophysical survey over Nariño and completing a reconnaissance geochemical program over the region in early 2018.

… in Nariño, we are training ex-combatant and local field assistants and conducting a field-inventory of mapped and known gold and porphyry-copper deposits and occurrences which fall within our package of concession applications.

In Nicaragua, the immediate focus of course is on the 2000m drilling program at Piedra Imán. We are currently upgrading access (see below) and preparing drill locations for what we believe will be an exciting drilling program on a style of deposit hitherto unrecognized in Nicaragua (Scholarly article IOCG's). Our model will obviously evolve rapidly with drilling results but the current thesis is leaning towards a manto-style deposit with shallow to moderate dipping copper-bearing breccia, sitting above a more gold-rich “feeder-zone”. As usual, the drill rig will prove to be a higher revelation than philosophy. Drilling should be underway in December.

Together with Hemco, our strategic partner in Nicaragua, we have executed a contract with MPX Geophysics Ltd. to fly heliborne magnetics and radiometrics over the entire 200,000 Ha of licenses in the Golden Triangle area. The Golden Triangle is home to Hemco’s Bonanza mine and Nicaragua’s most prolific gold producing area, having produced in excess of 8Moz since the early 1900’s (read Mining.com’s recent take here). We are hoping the airborne survey will generate new targets and help us contextualize and prioritize the more than 30 gold occurrences which have already been identified from within the license areas.

We will be at our usual stand (C21) at the London Mines and Money conference next week, the 27th to 30th of November. If you are in town do drop by or otherwise email us to arrange a meeting. 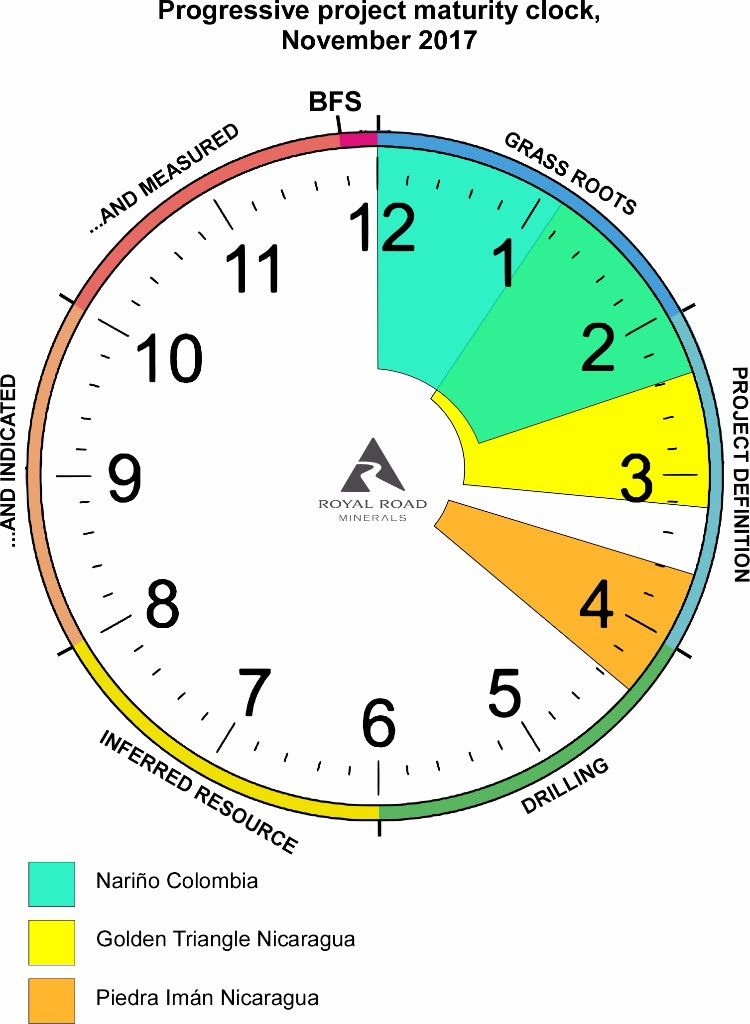