March 16, 2017 – Toronto, Ontario: Royal Road Minerals Limited (TSXV:RYR) (“Royal Road” or the “Company”) is pleased to provide an update of its exploration activities in Colombia and details of the Caza Gold acquisition projects (see press release, March 15, 2017) in Nicaragua.

With positive developments and the new political landscape in Colombia, Royal Road is actively expanding its presence by making application for over 450,000 hectares of concession contracts in Nariño Province (See Fig. 1) and by reviewing other promising gold opportunities in the region of its La Golondrina and La Redención gold projects and elsewhere throughout the country. 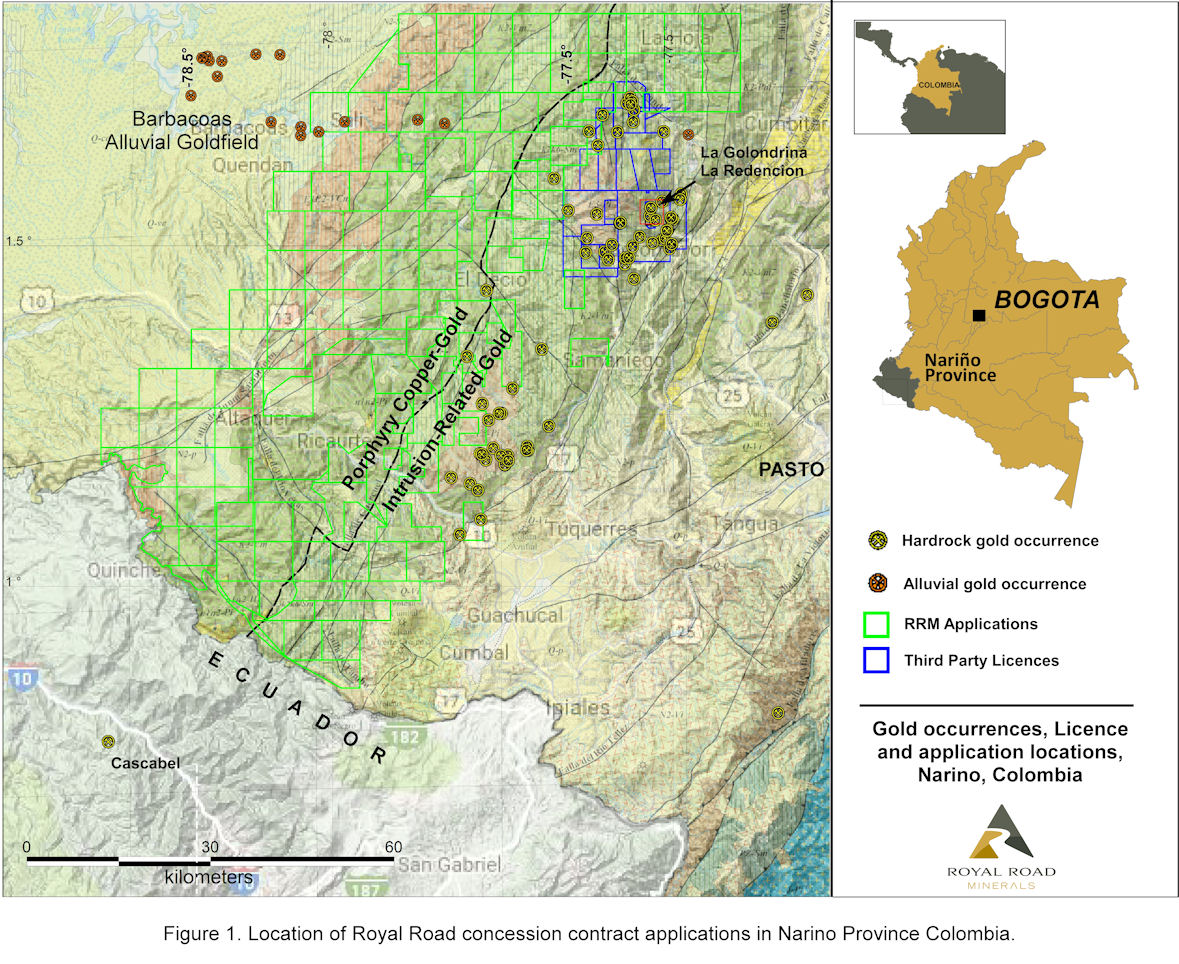 The Company is liaising regularly and actively pursuing alliances with Colombian Government bodies in order to responsibly align itself with the country’s post-conflict aspirations. One such initiative involves the potential joint acquisition of airborne magnetic and radiometric data covering the Company’s concession contract applications and areas of state mining reserve in Nariño Province. The proposed survey will cover areas known to be prospective for high-grade intrusion-related gold mineralization in the east and for porphyry copper and gold mineralization in the west (see Fig.1). The Company’s plan is to rationalize and reduce its application areas and focus on newly generated targets following completion of the airborne survey and subsequent reconnaissance field work and community consultation programs.

The Company has acquired more than 90% of Nicaragua-focused Caza Gold Corporation (“Caza”) and is currently completing compulsory acquisition of the remaining 10% (see press release, March 15, 2017). Caza holds close to 75,000 hectares of exploration license in the prospective Chortis Belt of western Nicaragua (see Fig.2). 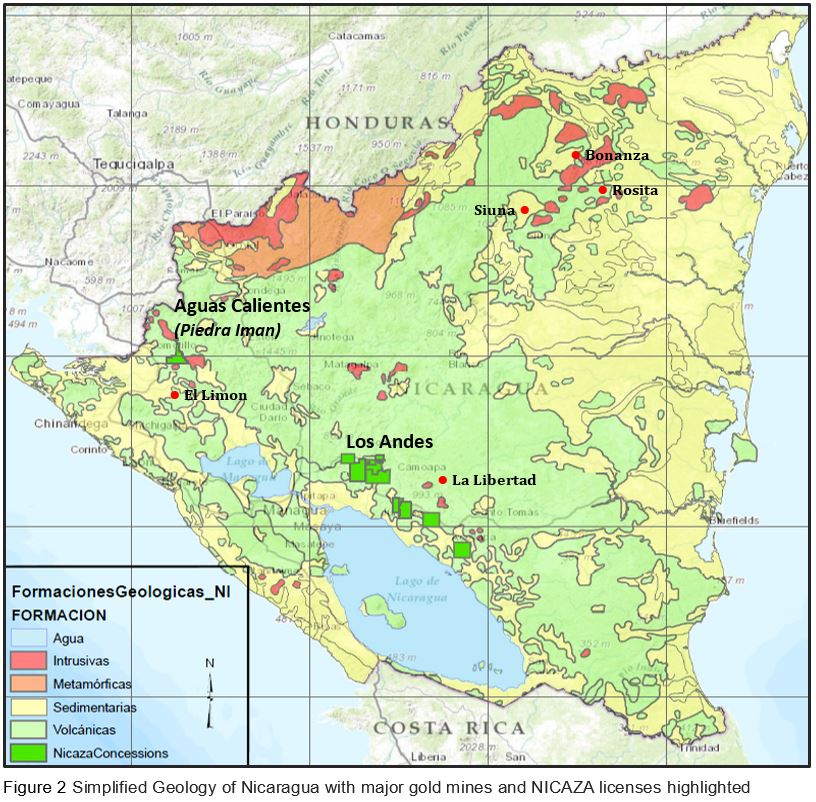 The two key projects in the portfolio of Caza assets which management believe to illustrate significant size-potential are the Los Andes and Piedra Imán projects.

The Los Andes district is located 90 km from Managua in the Department of Boaco. Access is via a major paved highway from Managua. Caza controls 100% of six mineral exploration concessions covering the Los Andes District. The total concession package is approximately 18,500 hectares.Within the district the dominant rocks are volcanics of andesitic composition belonging to the Late Oligocene to Early Pliocene Coyol Group. Numerous intrusive rocks cut the volcanic sequence, with at least two large dioritic porphyries identified to date. Associated with the intrusive/volcanic activity are numerous breccia pipes and diatremes. Hydrothermal alteration is extensive throughout the licence areas and is typically a combination of argillic (silica-clay), advanced argillic (silica-alunite), and silicification.In 2015 Caza completed an airborne geophysical survey over the area which highlighted a number of well-defined structural trends and radiometric anomalies. Short exploratory drilling campaigns conducted in 2014-15 targeted silicified lithocaps and localized breccias and intersected strong alteration and anomalous copper, silver, and gold in a number of holes but failed to intersect any potentially economic intervals of mineralization.Immediately around the lower slopes of Cerro Quizaltepe over 1,500 rock chip samples were collected by Caza geologists with 123 returning values greater than 200ppm copper and 31 greater than 500ppm. A similar halo of elevated gold was also recorded with 82 rock chips returning greater than 50ppb. When viewed alongside the airborne geophysics, this large area of copper-gold anomalous geochemistry is thought to be indicative of a copper-gold mineralized porphyry body at depth. Drilling at Cerro Quizaltepe was too shallow to fully test the deep porphyry potential but it did intersect alteration and anomalous copper mineralization (211.7m greater than 200ppm Cu in hole QZP-003 and 10.95m @ 0.19% Cu in hole QZP-002) supporting the interpretation of potential for an underlying higher grade porphyry copper and gold body. Recent modelling and interpretation of this data, suggests that the Los Andes area is represented by a circular caldera-style structure located immediately adjacent to and to the north of Cerro Quizaltepe (see Figs. 3 and 4). Management interpret the caldera to be a late-stage feature having developed late in the history of deep porphyry emplacement at Cerro Quizaltepe and hosting alteration that, whilst impressive in its extent, maybe distal to the main mineralized body and thus lower grade and sub-economic. 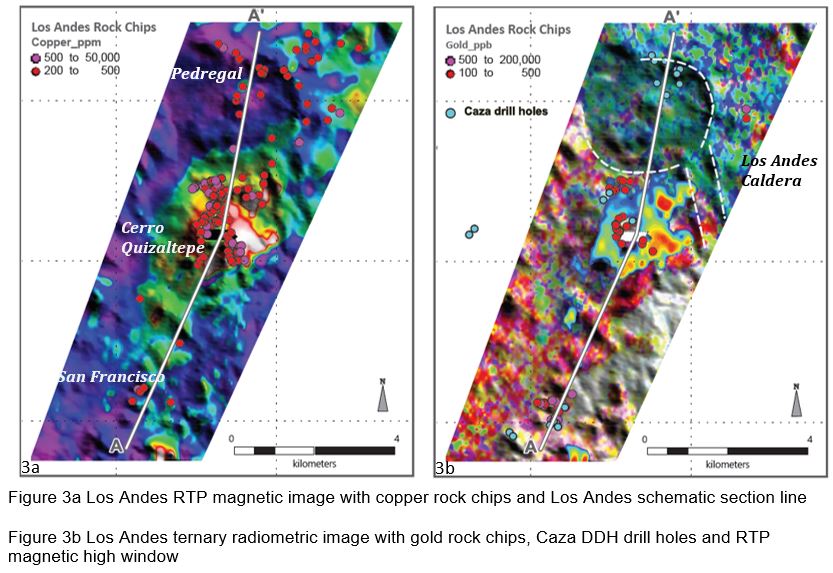 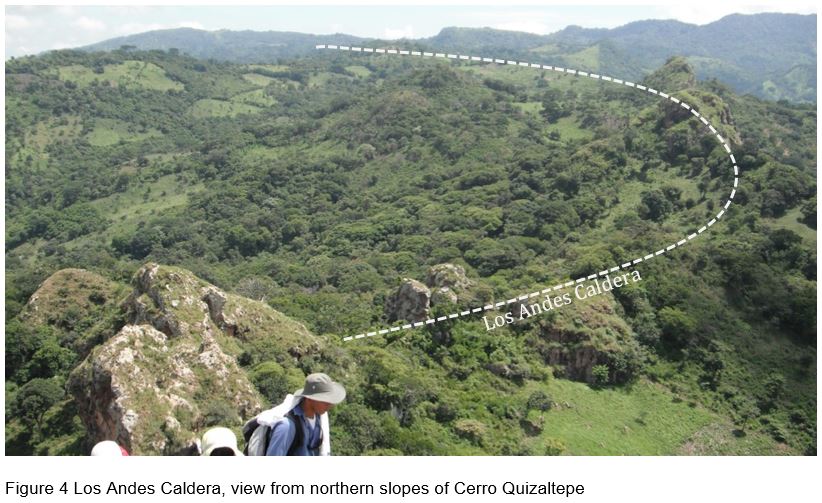 Managements view is that the principal target at Los Andes is a deep copper or copper and gold porphyry body located beneath Cerro Quizaltepe and at the southern margin of the Los Andes caldera (see Fig. 5). Testing of this body will require further geological modelling and then deep drilling. The Company is actively seeking a joint-venture partner to assist it with drill testing at Cerro Quizaltepe. 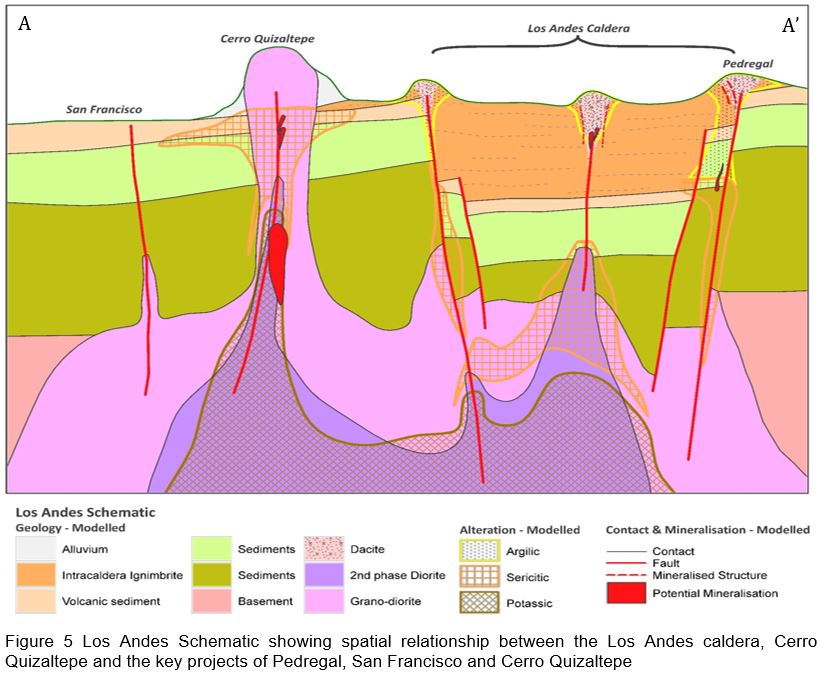 The Piedra Iman licence area is located 100km northwest of Managua via the Pan American Highway and 30 km north of B2 Gold's El Limon Mine. Within the greater region numerous small artisanal gold mines, including over 80 small gold processing plants, have been recorded. Caza, controls 100% of the 7,947.27 hectare Aguas Calientes Concession encompassing the Piedra Iman projectPiedra Imán was initially explored in the 70’s by a Noranda subsidiary and included drilling to 200m depth and the completion of one exploration adit. This drilling and underground sampling intersected significant widths of copper mineralization. Most samples were not assayed for gold and results are historic in nature and cannot be verified. A selection of the better historic results included the following (see Fig 6): 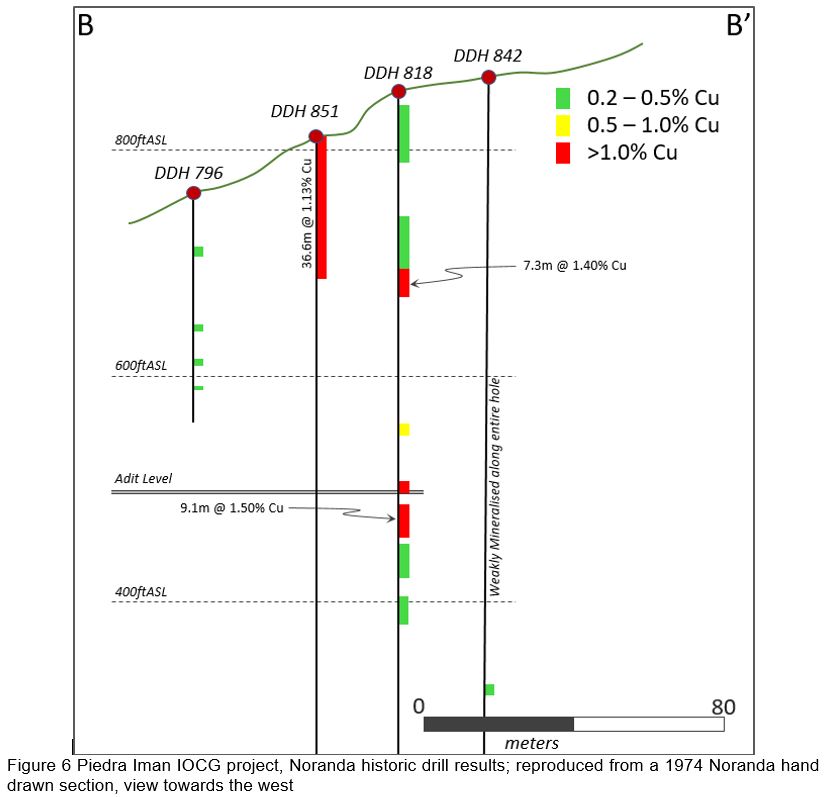 Gold and copper mineralization is associated with biotite, quartz veining and brecciation with the presence of magnetite, specularite and rose actinolite having been recorded in both historic drill core and hand specimen.

Recently rock-chip sampling by Caza reported grades of up to 60g/t Au and numerous copper samples grading +1% from Piedra Imán, (see Fig. 7). Royal Road Minerals plans to complete a ground-based magnetic survey as soon as possible to assist in identifying the areal extent of the potentially mineralized magnetic body. If possible, access to the underground adit will also be obtained, this will provide valuable information as to the mineralization style and characteristics at depth. 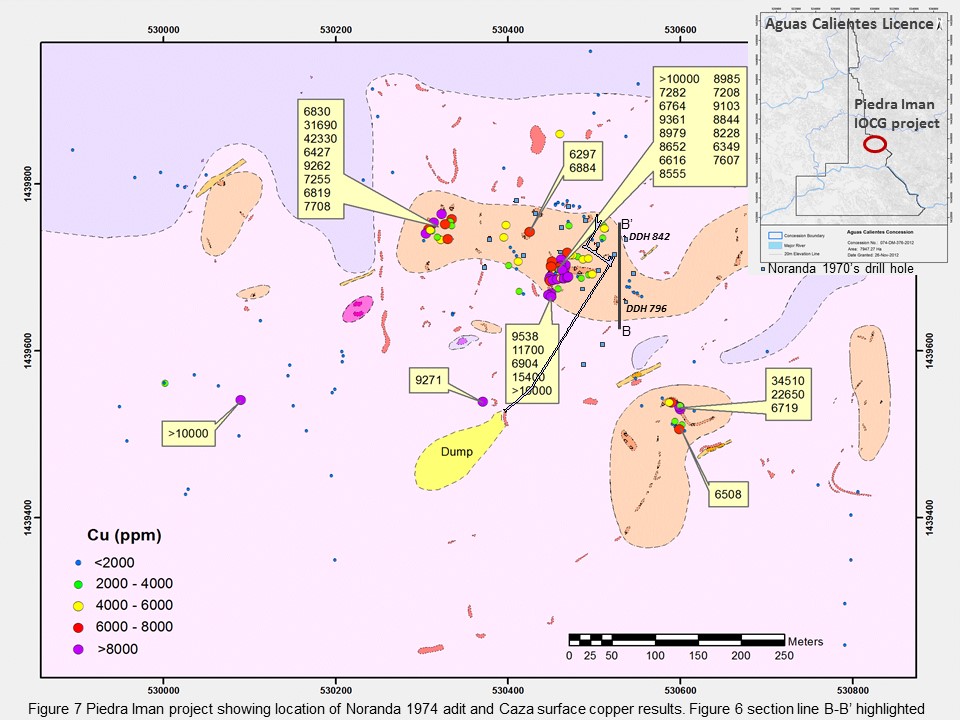 “2017 will be an exciting year for Royal Road” said Dr Tim Coughlin, Royal Road’s President and CEO, “our shareholders have given us a clear mandate to find something new, large and exciting and we are establishing the land package, the team and the structure to ensure we have the best chance of doing exactly that. In Colombia we have a dominant position in the highly exciting region of Nariño which is known to be underexplored and prospective for high-grade gold and copper and in Nicaragua, a country best known for vein deposits, we have two of the very few and potentially large bulk-tonnage occurrences currently identified in that region. We look forward to keeping the market informed as we advance our exciting initiatives throughout Latin America".

Neither the TSX Venture Exchange nor its Regulation Services Provider (as that term is defined in the policies of the TSX Venture Exchange) accepts responsibility for the adequacy or accuracy of this release.The information in this news release was compiled, reviewed and verified by Dr. Tim Coughlin, BSc (Geology), MSc (Exploration and Mining), PhD (Structural Geology), FAusIMM, President and CEO of Royal Road Minerals Ltd and a qualified person as defined by National Instrument 43-101. Royal Road Minerals employees are instructed to follow standard operating and quality assurance procedures intended to ensure that all sampling techniques and sample results meet international reporting standards. More information can be found on Royal Road Minerals web site at www.royalroadminerals.com