Royal Road Minerals Limited (TSXV:RYR) (“Royal Road” or the “Company”) is pleased to announce that the Territorial Delegation of the Department of Chinandega, a division of the Ministry for Environment and Natural Resources (“MARENA”) in Nicaragua, has issued the Company with an environmental permit (EP) which allows the Company to conduct further exploration activities, including drill-testing at its Piedra Imán copper-gold project in northeastern Nicaragua.

The Piedra Imán concession area is located in Chinandega District, 200km northwest of Managua via the Pan American Highway (Figure 1). The concession extends over approximately 8000Ha and is in force for a further 20 years. Royal Road acquired 100% of Piedra Imán through its acquisition of Caza Gold Corporation in May 2017 (see press release May 23, 2017). The project now forms part of the Company’s strategic alliance with local partner Hemco, a subsidiary of Grupo Mineros S.A. (MINEROS:CB), Colombia’s largest gold producer (see press release September 6, 2017).

Piedra Imán is a copper and gold project which shares many geological similarities with “cordilleran-style” Iron Oxide Copper Gold (IOCG) systems such as those which occur in Chile and Peru. The Piedra Imán project was initially explored in the early 1970’s by Noranda Inc (“Noranda”). Noranda’s work included the drilling of 17 shallow diamond drill holes and the development of one exploration adit. Noranda’s drilling and underground sampling intersected significant widths of copper mineralization including DDH-851 (36.6 meters at 1.13% Copper), DDH-876 (14.8 meters at 1.65% Copper), DDH-846 (14.3 meters at 1.42% Copper) and DDH-818 (9.1 meters at 1.50% Copper). Samples were only sporadically assayed for gold, but drilling results included one interval of 3.6 meters at 6.3 g/t gold. These results were provided in analogue format, compiled by Royal Road, are historic in nature and have not been verified by a qualified person. Noranda abandoned the project due to the onset of hostilities related with the Sandinista revolution in 1974.

Recent geological mapping at Piedra Imán has revealed that copper (chalcopyrite and bornite) and gold mineralization is associated with a breccia body and most commonly with magnetite-actinolite-albite alteration. Higher-grade gold mineralization is related to steep-dipping actinolite bearing fractures in granitic rock which is located adjacent to and possibly structurally beneath the breccia body (manto-style).

In order to assess the continuity and local extent of copper and gold mineralization at Piedra Imán, Royal Road collected horizontal saw-cut channel samples (see press release June 21, 2017). A total of 9 channels were cut and sampled on 1 meter intervals over a total strike distance of approximately 400m. Results are presented in Figure 1.

Royal Road will conduct an initial scout drilling program of 10 reverse-circulation drill holes for a total of 2000 meters to test potential and help reveal the geometry and extent of copper and gold mineralization at the Piedra Imán project.

“With our permits now in place, we intend to mobilize drilling rigs and commence drilling at Piedra Imán as soon as possible” said Dr Tim Coughlin, Royal Road’s President and CEO. “When the project was initially drilled by Noranda in the early 1970’s, core recoveries were low, gold was not a principal focus and the Iron Oxide Copper Gold deposit-model was non-existent. We are very excited by the potential of this project and committed to ensuring our work exceeds the requirements of MARENA and is exemplary in terms of community engagement and environmental stewardship”. 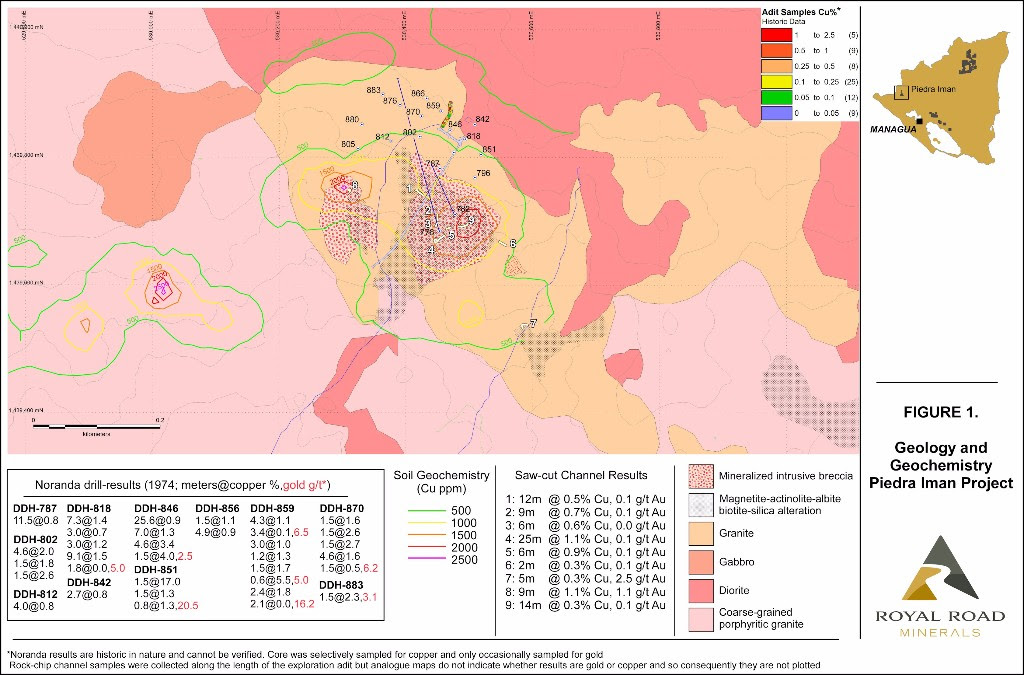