September 6th, 2017 – Toronto, Ontario: Royal Road Minerals Limited (TSXV:RYR) (“Royal Road” or the “Company”) is pleased to announce that it has executed a strategic alliance agreement with Hemco S.A. (“Hemco”), forming a strategic alliance (the “Alliance”) for mineral exploration in Nicaragua.

The objective of the Alliance is to identify and explore gold and copper targets in Nicaragua in the areas covered by Royal Road’s and Hemco’s respective specified existing licenses, which together cover large regions of highly prospective and under-explored land areas and include in excess of 35 currently identified prospect areas. The Alliance will bring together two experienced project generation and exploration teams with track records of success. Royal Road and Hemco will share their collective experience and databases, co-fund early stage exploration programs, and jointly seek to advance their current projects and pursue new projects in Nicaragua. In particular, the Alliance is initially focused on defining reserves in excess of two million ounces of gold (or gold equivalent) recoverable.

Hemco is a subsidiary of Grupo Mineros S.A. (MINEROS:CB), Colombia’s largest gold producer, and a holder of licenses covering an area approximately 200,000 hectares in the historic mining region of northeastern Nicaragua known as the “Golden Triangle”(see Figure 1). 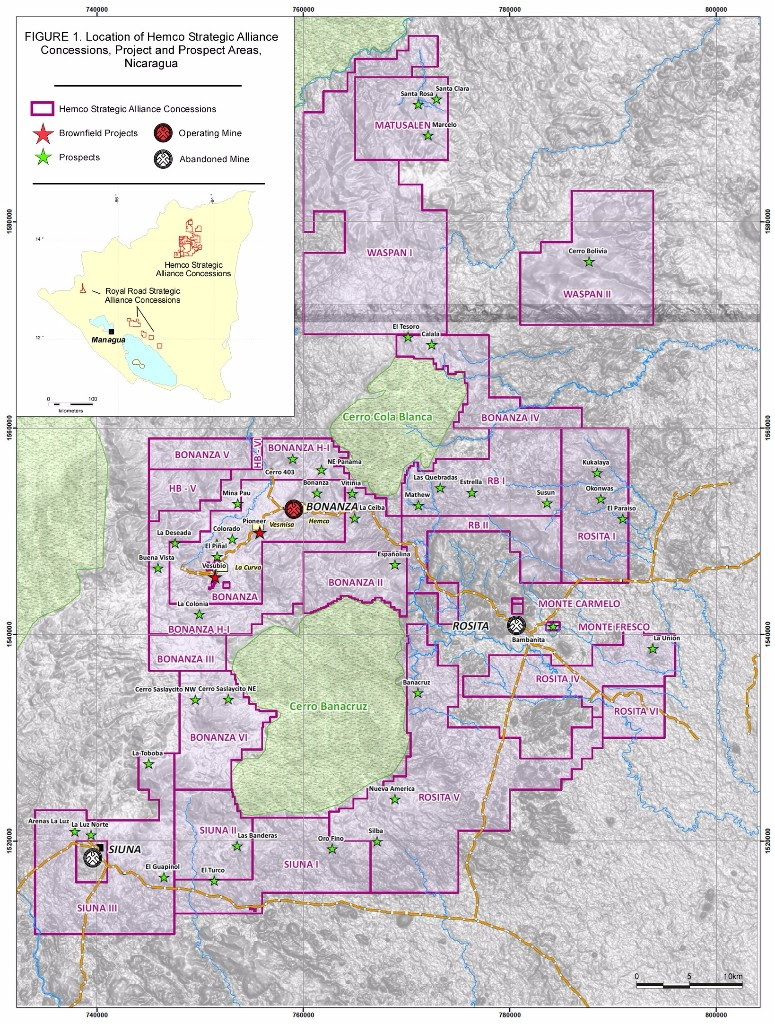 “This joint-venture unlocks significant potential for both parties” said Dr. Tim Coughlin, Royal Road’s President and CEO. He added: “We are proud to be aligned with such a respected partner in Nicaragua and excited to have acquired access to the “Golden Triangle” area which, in addition to our Nariño project in Colombia, provides the Company with another region of gold and copper exploration potential. Moreover, with funding expected to be contributed by Hemco, we anticipate being in a position to drill test the underlying potential of the exciting Los Andes porphyry copper and gold target, whilst also commencing the planned drilling program at Piedra Iman on an accelerated basis.”

Eduardo Flores Zelaya VP Corporate Development of Mineros S.A. stated “This Alliance, with a Company which uses innovative strategies and tools to identify and explore new gold deposits, will significantly improve our probability of success in Nicaragua”.

Under the terms of the Alliance, Hemco and Royal Road will jointly fund on an equal basis, initial project generation and exploration of targets. At any time after the commencement of permitted drilling of any project area, parties may elect to define such project area as a “designated project area” (a “DPA”) following-which, the applicable rights and licenses for such DPA will be held by a newly formed joint venture company, with Royal Road and Hemco each initially holding an equal 50% proportionate equity interest thereof. All project costs of any such joint venture will be co-funded by the parties based on their respective ownership of the joint venture, which will be subject to dilution in the event funds are not contributed as required. If a party’s interest in a joint venture is diluted below 15% of the total interest, such party’s interest in the joint venture will automatically convert to a 1.5% net smelter return royalty. The terms of the Alliance also restrict the parties from transferring their respective interests in the relevant licenses covered by the Alliance, except in accordance with the agreement between the parties, which includes reciprocal rights of first refusal with respect to transfers to third parties. Royal Road will be the operator under the Alliance and any joint ventures formed thereunder, and certain decisions of the operator will be subject to the approval of a management committee consisting of two representatives of each of Hemco and Royal Road.

Royal Road anticipates that the initial program to be approved under the Alliance will consist of drilling at Royal Road’s Piedra Iman project (see Royal Road’s news release dated June 21st 2017), prospect inventory mapping and heliborne magnetics and radiometrics in Hemco’s “Golden Triangle” licensed areas, followed by the drilling of two deep holes to test the porphyry copper and gold potential of Royal Road’s Los Andes project (see Royal Road’s news release dated April 8th 2017). Royal Road’s management estimates that the budget for this program will be approximately CAD $1.8 million and funded on a 50%/50% basis by the parties.

Dear Investor,Today’s confusion of unfathomable variables seems something like a flock of noisy starlings that has converged to block out our summer

June 2nd, 2021 – Toronto, Ontario: Royal Road Minerals Limited (TSXV:RYR) (“Royal Road” or the “Company”) is pleased to announce that it has received