September 26, 2017 – Toronto, Ontario: Royal Road Minerals Limited (TSXV:RYR) (“Royal Road” or the “Company”) is pleased to announce that it has entered into a binding framework agreement (the “Agreement”) with Economías Sociales del Común (“Ecomún”) in support of its gold and copper exploration projects in the Nariño Province in southern Colombia.

Royal Road has submitted application for in excess of 400,000 hectares of Concession Contracts covering what management believe is highly prospective geology for both gold and copper-gold mineralization in Nariño province of southern Colombia (see Figure 1). Of those applications, approximately 40% have advanced beyond the initial process of area adjustments and acquiring local municipal approvals and have been offered to the Company as 30-year Concession Contracts. The Company has accepted these applications and is advancing with the National Mining Agency (ANM) to complete the Concession Contract process.

The Agreement with Ecomún provides a binding framework for the support of Royal Road’s long-term mineral exploration and development plans in Nariño Province, aligns Royal Road with the Colombian Government’s post-conflict aspirations, as contemplated by the British Embassy’s Business and Peace Initiative (to which Royal Road is a signatory), and demands an exemplary level of social engagement and environmental stewardship from both parties.

Ecomún is a joint social and economic organization, which was formed by Presidential Decree on May 29, 2017, with funding and other support provided by the Colombian government and with the aim of collective and individual economic and social reincorporation of the members of the Revolutionary Armed Forces of Colombia People’s Army (FARC-EP), in accordance with the final peace agreement, between the Government of Colombia and the FARC-EP on November 24, 2016.

This Agreement, which is the first of its kind since the 2016 peace agreement, will require definitive documentation, and includes the following key terms:

Dr. Timothy Coughlin, Royal Road´s President and Chief Executive Officer, stated: “Reaching an agreement on the key terms of a deal with Ecomún is a significant milestone for Royal Road and for our Nariño project. This agreement is historic in that it is the first of its kind since the peace agreement was reached. The agreed framework is an important step in allowing Royal Road to establish and maintain broad-based community and governmental support for its operations in Nariño Province, and reaffirms our commitment to generating economic benefits locally and to high standards of social and environmental performance.”

He added: “We wish to thank Ecomún and the Colombian Government for their constructive engagement and for partnering with Royal Road to further its local and corporate objectives, through sensible mineral exploration and sustainable development. We are also grateful for the support the British Embassy in Bogotá has provided in terms of our entry into the Colombia market. This process marks the beginning of a new period of collaboration between Royal Road and our local neighbors.” 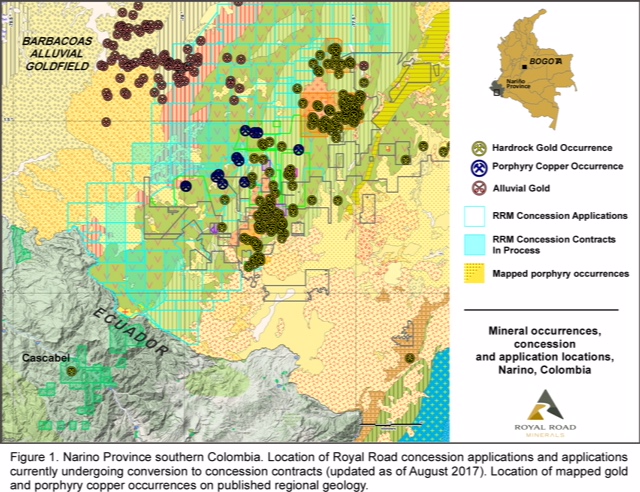 More information can be found on Royal Road Minerals web site at www.royalroadminerals.com